My tribute to those who lost their lives not only in Orlando but in far too many similar tragedies across this country. 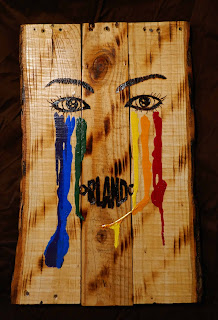 As with some of the earlier pieces posted here, this is made from reclaimed pallet wood.

I first painted the wood white and then outline the bat with a wood burning tool. The remainder was created using a torch.

As I coated the piece with urethane... to seal the ash so that it doesn't get all over people... I was pleasantly surprised in the way the ash spread across the entire piece adding more texture to it and changing the color to a more brownish/off white. 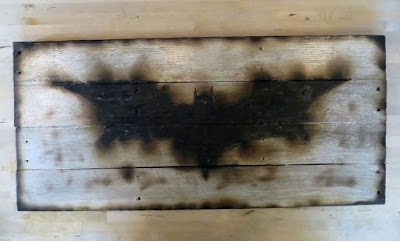 This is one of my more favorite pieces. Of course that has a lot to do with my love for the move, The Crow.

It's made on stained pallet wood. The design is outline using a wood burning tool. The rest of it, however, was made using a regular torch. You can see from other pieces here that this is something I've really gotten into.... always loved playing with fire... and I'm continuing to explore different ways to use fire to create art. 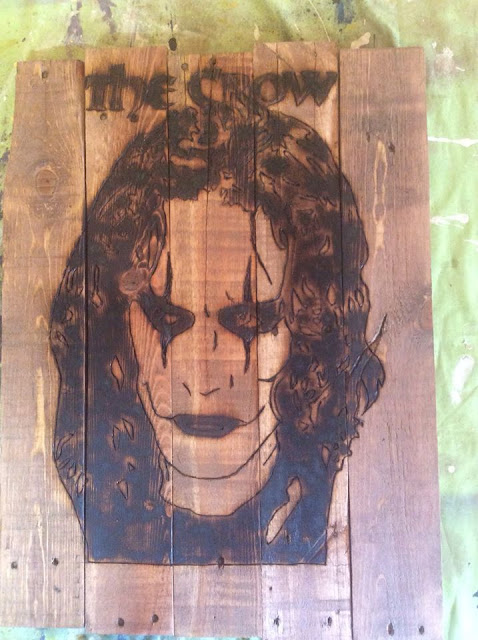 Balloon at Night/Birds on a Wire

I wanted to do the Balloon at Night to have something a bit lighter in the collection. Similarly to the Birds on a Wire I do some time back, also pictured below.

The Balloon is painted with acrylic paints that have been watered down, as are the clouds at the bottom. The Balloon is outlined using a wood burning tool. The dark area around the balloon was burnt using a regular torch. I finished it with a urethane coating.

The Birds on a Wire were created in a similar fashion, except in the opposite way with the birds being the piece burnt with a torch. 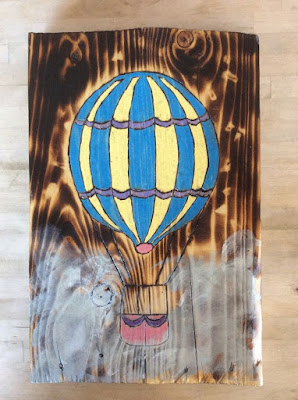 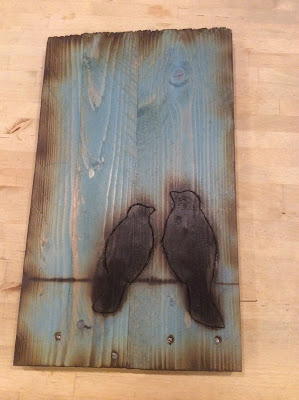 I'd always wanted to make a lamp out of old books... don't ask me why, I just wanted to.

I picked up a couple of boxes full of books at an auction last fall and finally got around to doing something with them.

The idea of a book lamp isn't particularly original so I wanted to put a twist to it. I painted the books black and then added the Shakespeare silhouette to the side, and the comedy/drama masks in the top corner. 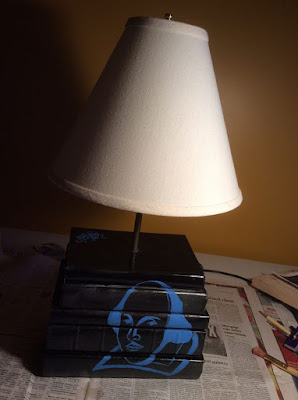 The shell for Songbird Radio was given to me by the director at Bucktown Center for the Arts  director's gallery where I display my work. It was already a hollow radio with the inside workings missing.

I had a little fun with this one, hanging songbirds in the front with a curtain behind them. There are speakers in the back to plug in your phone or ipod... so it is an actual working piece.

The back is simply attached with Velcro so it is easy to get into the radio and reach the speakers. 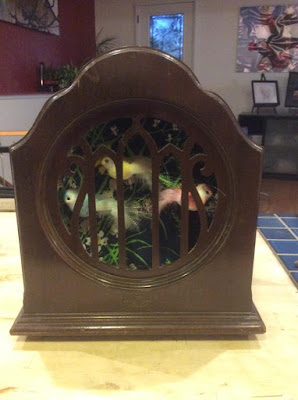 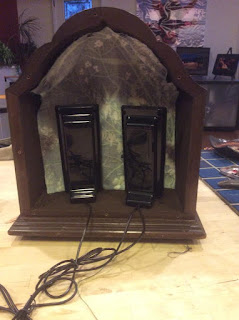 The Old Rustic Cross is made from old pallet wood that I stained with an ebony stain. It is larger than it appears, the vertical board is close to three foot long.

The halo is made from wood that is wrapped in recycled aluminum cans that I then dented with a hammer. 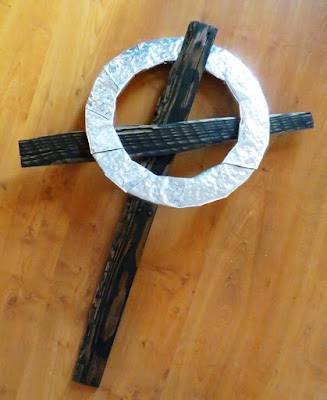 These three clocks are made from old records I picked up at a flea market. The shape of the clock matches the song on the record.
h
The Santa Clock song is "Santa, Santa, Santa." The Snowman Clock is Gene Autry's "tFroste Snowman." And, the Cupid Clock is "Avon Valentine Favorites," yes that Avon.

They were made by hand, using a hot knife, similar to an exacto knife but plugs in and heats up. People often think I just used a jigsaw but that would have torn the records up, they are far too brittle for that.

I also often get questions about the value of the records. Some are scratched or already damaged, and even those that aren't really aren't worth that much. 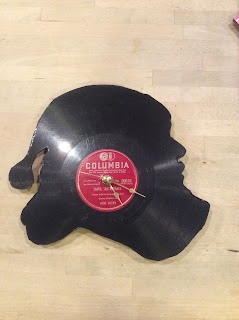 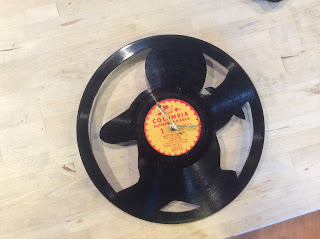 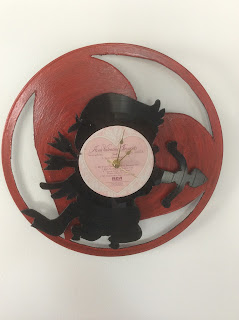 The Rustic Heart was made from scrap pieces of wood I saved as I was doing a variety of projects. It was fun to assemble, much like putting a jigsaw puzzle together. The heart is mounted on salvaged pallet wood that has been stained.

The Wine Bottle is made from old wine corks and then surrounded by pennies... finally a use for all those pennies that piled up in that jar on my dresser. The grapes in the middle of the bottle are simply the end of the wine cork that was inside the bottled, stained by the wine. It's mounted on salvaged wood from other projects and then given a urethane coating. 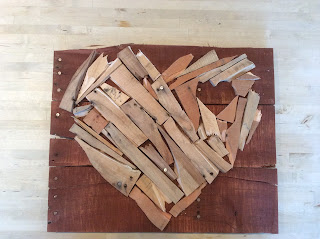 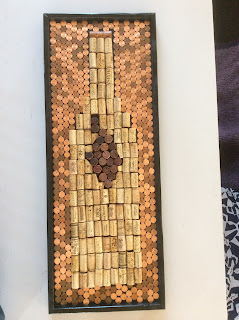 It's funny how things go. I made the bubblegum machine lamp here and it didn't sell for a couple of months. But, when it did sell I had another buyer come in right behind it and want one as well. Fortunately, a friend at Bucktown gave me a bubblegum machine at that same time and I was able to turn it around right away.

The torch lamp sold almost as soon as I put it on display. The torch came from Habitat ReStore, one of my favorite place to search for salvage materials. 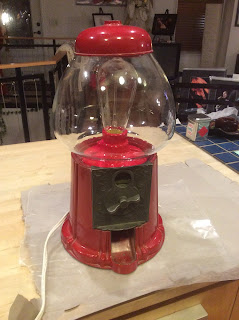 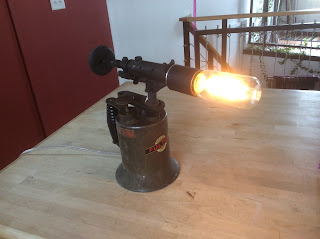 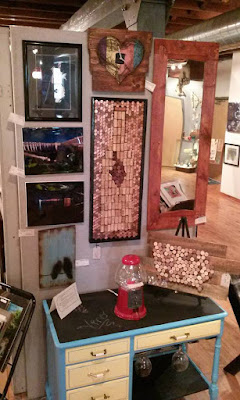 Been neglecting my blog here. My plan is to transfer this url over to a regular website, but haven't gotten that far yet. In the meantime, I should catch up a little bit... a lot has happened since I last posted here. I'm not going to post everything here but I will do some of the more recent items.

This is a photo of my display at Bucktown Center for the Arts where I display my work. Bucktown is located in downtown Davenport, 225 East 2nd St.

This photo is a little old, so several of the items are already sold.