The college where I work partners with a local company each year on a golf tournament fundraiser. Money from the event supports the college's safety training center where we train firefighters, emt and other safety rescue personnel. 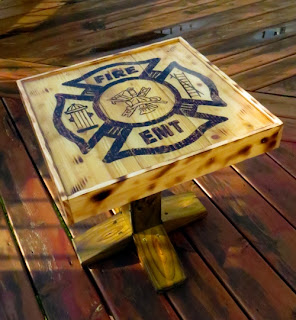 During a meeting about a month ago we were talking about getting items for a raffle. Sitting there an idea formed in my pea pickin` brain about a table I could make for the raffle. After the meeting I couldn't stop thinking about it and really began to like the idea, but I wasn't sure I would have the time to get it done.

I eventually decided I just didn't need to add another project to my list and let the idea go. But it wouldn't let go of me. It just kept popping into my head and finally, after not being able to sleep much of one night as I tossed and turned thinking about it, I knew I wouldn't be happy if I didn't do it.

Ultimately, the deciding moment came when I rummaged through the workshop and realized I had enough leftover materials from previous projects to make it happen.

The top is roughly 16 inches square, made from a 2 x 6 joined together with glue and biscuits. It stands about 18 inches high. The base is made from a leftover landscaping timber, the same as I used in the bowling alley tables I talked about in a previous post. 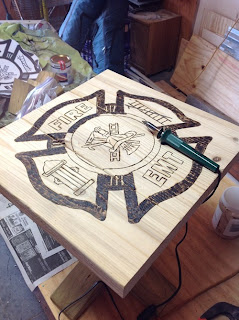 I burned the emblem into the top with a woodburning pen. That was the most laborious part of the whole project, probably taking a good three to four hours to complete. I then used a torch to add the additional burn markings.

The top is covered with epoxy resin, like that used on bar tops. The rest of the piece is covered with three coatings of spar varnish, used to protect boat exteriors. I figured it's something a person will put outside on their deck or patio, and I wanted to make sure it was protected against rain.

This piece really did come out the way I had imagined it, it's not often I can say that. I really wouldn't mind keeping it for myself but that's not what the plan was so I will be donating to the cause. Hopefully it will help sell a few raffle tickets at the tournament tomorrow. 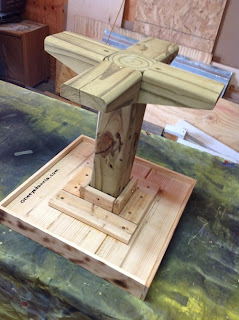