I love it when different ideas converge into one and become reality. 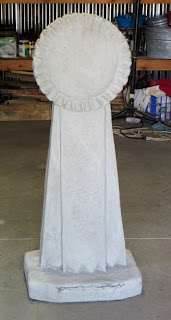 There’s two things on my list that I’ve wanted to do for the past few years. (Well, there are a whole lotta things on that list, but that’s a different story. ) These particular two came together at the same time, providing me the opportunity to check both off that list in one fell swoop.

The first thing is that I’ve wanted to get involved in one of these statue decorating contests you see from time to time. You know the ones, where some city or cause decides to hold a contest to see who can best decorate a common statue design.

Chicago was one of the first to do it with their famous cows. Cleveland has done guitars in honor of the Rock and Roll Hall of Fame. Not long ago the library in Iowa City did one with open books. I almost entered that one with darling daughter but she ran out of time and we had to pass.

I’m not so much into the competition part of it, I’ve just always thought it would be fun to give decorating a statue a try.

The second thing on the list is that I’ve wanted to create a four-foot tall gnome to display in front of my home. I mean, if you’re going to have a gnome in your yard, why waste time with one of those little ones that no one can see? I want one that will scare the neighbors 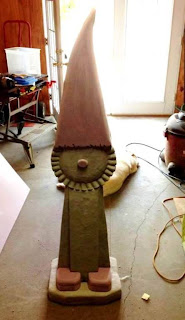 Cutting to the chase, the Iowa State Fair is doing a statue contest this year and the design is a state fair ribbon. When I heard about it I began to create ideas for what I might do. And then, yes, it finally hit me, I can make it a gnome. Duh!

So I sent in my idea, was fortunate enough to be chosen, and the work began. (Oh, and if you’re wondering, in this particular contest the entrants pay for their statue and expenses, but get to keep the statue after the fair. That’s a little different than many others where they sell the statue at the end of the event as a fundraiser.)

The statue is roughly four feet high, made of solid concrete. I made the hat, nose, belt buckle and boots out of Styrofoam, the pink kind that comes in sheets and is used as insulation in walls.

I had to glue four sheets together because I was unable to find a solid block thick enough to cover the depth, front to back, of the statue. The nose, buckle and boots were easily glued onto the statue. The hat was a bit trickier. 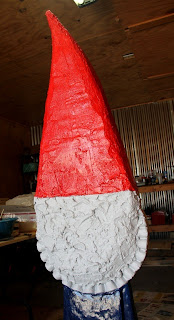 To provide extra area for gluing, I designed the hat so that the front drops a little further down on the statue and, in the back, the Styrofoam almost covers the entire circular area at the statue top.

I then used bondo, yes the stuff they use on cars, to fill in a lot of the statue’s voids under where the hat would be glued to it, to try to make the area as flat as possible. Without filling those voids, the glue would have simply filled in those cracks and voids, and wouldn’t have reached the foam to adhere it to the concrete.

Finally, I drilled two holes into the top of the statue and inserted metal rods that extend up inside the hat, and glued it all together.
The next step in the process was to hard coat all the foam to protect it from the elements. The hard coat came from Hot Wire Foam Factory, you can check out what I used on their website.

I coated everything two to three times. Applying it is kind of like frosting a cake, but a whole lot messier. I smoothed down the coating on everything except the “hair area” on the back of his head. There, I left it quite rough, almost looping so that it looks like curly hair.

I also made the belt around him with the hard coat by using modeling clay in two horizontal strips, filling in the space in the middle with the coat. Once it was dry, I simply removed the clay and sanded down some of the rough edges with a file.

From there, all that was left was to paint Gnomey. Yes, that’s his name. The face, by the way, is the face of the Iowa State Fair ribbon mascot.

Oh, and by the way, that part I mentioned about wanting a four-foot-tall gnome for in front of my house? Well, with his hat, Gnomey is five feet tall.

I will be delivering Gnomey to the fairgrounds this week. I hope he’s safe while he’s away from me. This year’s fair is August 8 – 18 and Gnomey will be located somewhere on the grounds.